Like every year, we went to the villages with a small group of enthusiastic young people eager and excited to know more about villages. Gramya Manthan, the rural immersion program that happened in June 2015. During the program, a camp for Eye check up was organized  for the people of surrounding villages. More than 200 people turned up for check up, most of them were old men and women. During the camp, we came across 21 people who were suffering from cataract disease, which is a curable blindness. All they needed was a small surgery to get their sight back. In the scorching heat of June local care was limited and not infeasible to have surgeries. On consultation, mild winters of February 2016 were finalized for operation and thus began the planning with the beginning of new year.

On 11th February, I and my team-mate Ajay Sharma reached Paliya. We had already shared about surgery with a few people from the village over a call. Now, the next step was to visit homes and talk to people. After the first round of conversations in the village, mixed responses were received. We were a bit worried whether people would come for surgery or not yet in our heads we were determined to make the surgeries happen even if there were 5 people ready as we had planned for 20 surgeries. Surprisingly, People had different notions about an operation here in the village. Many have had distressing experiences with doctors in the past while some of the responses were hilarious enough as one old lady said that they might take our eye out and I might get blind and some said the doctors take out kidneys etc. showing their respective worries. 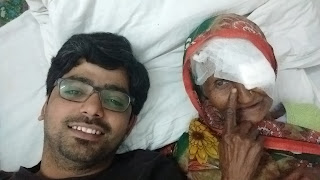 During a basic check up before the operation like BP, Sugar etc a lot of people gathered marking a good response and positive spirit to go ahead with the plan.To our surprise, an old lady around 70-year old had Blood Sugar level at 268 which is quite dangerous and she was unaware about the same. Such incidents showed us the reality of what more needs to be done in rural India. These are the basic healthcare facilities and our people have been unaware and denied of this for decades. 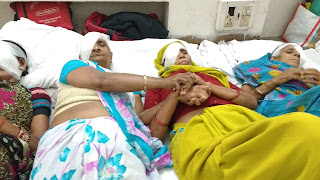 It was such an amazing experience to be there and share(sometimes convince) that how life could change post this operation. There was a lot to learn from their responses as it showed a lot of apprehensions, their past experiences and how they have not been given basic access. Another heart-filling humorous incident happened when an old lady came to us next day that the doctor has filled her hand with air yesterday and it has been paining, to our surprise the doctor checked her BP and she was convinced that her hand is filled with air now. :) On one side I was in laughter but on the other side it made me wonder that she has never ever experienced this before.

Finally, the day had come. We were ready to make the move to Kanpur city and many of the people who agreed yesterday  had dropped out. There were several reasons and one of them that really worried me was apathy of younger generation towards old people within families. For a moment, we grappled on how to make sure that we have at least 5 people. We reached out to all who had given their confirmation earlier and heard their concern.It was humbling to see the challenges and importance of a day for them, as how difficult it was for many to take a couple of day's leave.

We finally had 8 people with whom we left for the villages and it was such a fulfilling feeling to see their trust and belief in us. The operation was scheduled for next day, cataract surgery is not a long process. It's a 20 min. surgery but the nervousness was quite visible, sharing stories of our distant relatives who had undergone this surgery and how simple it was served to pacify their queasy hearts.

It was such an endearing experience the next day to witness as they held each others hand with love and encouragement to vanishing all the fear before calling in for the operation. The time came and 5 of them were called to get ready for operation. It was a difficult time for me as well, 8 people had come all the way with sheer trust and hope and if something goes wrong what would I say to their families. The utmost belief they showed in me that none of their families accompanied and they said to me, "Bhaiya, you just be with them constantly." Meanwhile, I meditated to calm myself and then cleaned the room where we all were staying. In the next three hours all were back, pin-drop silence in the room, a couple of them were trembling. All I could do was hold their hand and be with them. It is hard for me to express that moment in words, as some feelings can only be felt in our hearts. They were made sleep then.

As they woke up, the amusing conversations started. By now, other Youth Alliance volunteers had also arrived. Tejal, our alumni from first GM was also there, making sure that she is there with them and taking care of their basic needs like to use toilet. By the evening the room was filled with laughter and lively spirits. I had to request our oldies to talk less. Happiness was evident and infectious. We also had three volunteers from Mexico, Honduras, and Panama. They were amazed to see a hospital room filled with so much love.
Next day the bandages were removed to check for the vision and gratefully everything went well for all. The joy was of hopes being fulfilled. Now, all were excited to go back home and see their families. We reached back to villages post noon, explained about the future medication and care that was needed to be taken. I felt relaxed and at peace. 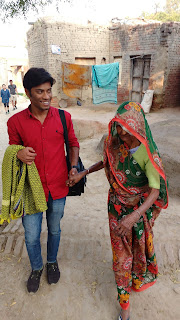 I am sure these eight stories will be a powerful example and people will not delay in health matters. This was not just a health care initiative but a huge step to break many stereotypes in disguise, it had already brought a Brahmin and SC on the same bed, yes they did not touch each other but atleast they were next to each other on bed.


At last, I would like to thank everyone, who came forward to support us, especially Dr. Awadh Dubey(Eye Surgeon) who offered us his services and has been a huge support for Gramya Manthan since the beginning. All this was possible because there is love in everyone's heart for everyone, it is just that we need a medium and chance to express.
Posted by Prakhar Bhartiya at 6:14 PM