Gandhi was one of the most prolific thinkers of the 20th century. His ideas of struggle against imperialism were way more progressive than where he was then. He embodied the idea of non-violent revolution through civil disobedience during a time in history when the world saw the two biggest wars and a major era of his political and social work was marred by extreme violence across the world. Yet, his own nation has forgotten his ideas and while we argue and talk about capitalism, socialism, communism and quote the theories and its philosophers, we completely miss the ideas spoken by Gandhi and lived by him. 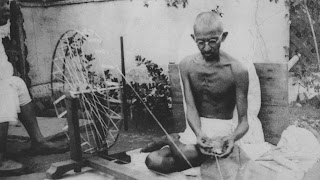 As we look around the world and especially in India where he is called, " The Father of the Nation", we don't find a formidable group that stands strongly and advocates the ideas of Gandhi. On a much deeper analysis of why this is happening, it is quite simple to find reliable conclusions. First, Gandhi wasn't just an activist, his philosophy started with living his ideas and herein lies the challenge-  living a life of simplicity, transparency, non-violence, non-accumulation, truth and loving your fiercest enemy is the most difficult thing possible. Gandhi’s ideas are those of personal transformation and internalizing the change we wish to see in the world, none of his ideas are of externalizing change. On the other hand, we study ideologies that are equally formidable, but they most commonly are about demanding activism and even promoting violence. The onus of self-control and personal transformation isn’t the first thing asked and being the change often isn’t the foundation.

Second, which comes as a by-product of the first one, is that the ideas of Gandhi are that of internalizing, so people who are truly living them are mostly away in their own way, shaking the world gently. They won’t come to defend Gandhi because they have a deeper belief in the strength of his ideas and the change it has brought in their own lives. If we look across society, we find groups of people who vociferously advocate for Ambedkar or Bhagat Singh or even Savarkar. They will be seen on TV debates, on roads, and in rallies but we won't find a formidable group advocating Gandhi’s ideas. In Hind Swaraj, a book on his idea of India, he has written that the people weren’t ready for the sort of internal change he was propagating back then and in the 21st century, with the rise of capitalism and consumerism his ideas seem to have been lost to a large population.

Third, Gandhi was for everyone, not specific to a class, caste or religion. He spoke for humanity, his work might have focused on the upliftment of a particular marginalized community but he saw them as humans first. He even loved his oppressors and never termed the Britishers as the enemy and cared for them as well. Most other political figures spoke about a particular class, caste or a religion at large and thus, to date, have a strong following, with people standing for them and fighting for them.  Gandhi though was for everyone. It seems that none remained his in the truest sense. He has used a symbol for personal gain but not for the emancipation of humanity.

The most striking feature is regarding the perception that people, especially the youth have, about Gandhi which is often formed from cherry-picking insights from the popular debates surrounding him. Few have read his ideas in “Hind Swaraj” or his autobiography, “My Experiments with Truth” and rarely have they tried to live them in their life except a few who have been able to do so. Over the course of past 10 years I have met numerous people who have been inspired by his ideas and the ones who truly believe in him, see him as a human with flaws like any of us but with an indomitable spirit to experiment, fail, learn, grow, love and be the change.

Today, in this divided and polarized world, we need more people to imbibe his principles of truth, non-violence, peace, selfless service and love for humanity, more people who connect hearts, more people who see humans as humans. We need to learn his ability to respectfully dialogue with people of opposite opinions. He is more relevant than ever and all we need is to give his ideas the importance they deserve. He wasn’t God, he was one of us who did what he could in his lifetime and now it is up to us to take forward his ideas through practice. This complex world doesn’t need one Gandhi but many more. His ideas aren’t that of instant gratification but of lasting courage. True peace can be established through ideas of non-violence and civil disobedience but that shall happen only when there is a critical mass who believes in it and follows it.

Gandhi was a simple man like us, he became extraordinary because he lived the ideas he spoke about. He became the change, he wished to see in the world.

Posted by Prakhar Bhartiya at 6:02 PM No comments: Links to this post