First of all heartfelt congratulations to Pranab Da for taking up the new post of President of India.

One of the few parliamentarians respected by all the parties. He has been the savior of government and specially Congress in the recent trend of Indian politics. Often called as man behind the mask, the man who has been running UPA-2 in worst of its times.

He was the one who deserved to be the PM but he was someone who can't be moderated and controlled. And this freedom loving habit of his kept him away from PM's post because in congress the top post remains with the family or someone who has excelled in the habit of nodding his head. Here is where he lacked. 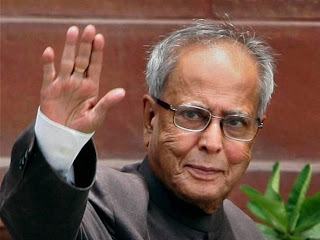 Finally he is rewarded for his loyalty towards both family and then party.

Now, the big question is how will he maintain the authenticity of the top post by being non-political. President is a non-political post but in India its only on papers. If we dig in the history most of our Presidents have been from political parties, leaving a few like Mr. Kalam during Vajpayee's government.

How can a man who has been associated with one party throughout his life, has been the savior of government till a week before taking up the post of President be non-political. Its a huge challenge for Pranab Da. It takes a day to get over the jet-lag after a 20hr. flight, here its like a jet lag of a lifetime. If we go in the Hindu mythology, the Gods have been partial to their loved ones, be it Vishnu taking an identity of a dancer and serving "Amrit" to other Gods or Krishna helping Arjun on battlefield of Mahabharat. The Gods have failed but Pranab might not.

How will you be impartial "Pranab Da" ?

Its a challenge but in true spirit we hope that you will be impartial and be a non-partisan President.

Posted by Prakhar Bhartiya at 1:59 AM

Email ThisBlogThis!Share to TwitterShare to FacebookShare to Pinterest
Labels: polity

Very well written, I hope Pranab Da is able to live up to the expectation. In the past, most of the political leader have let us down in some or the other way. I am keeping my fingers crossed.